Creature of the Night 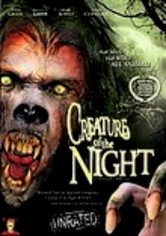 Creature of the Night

2006 NR 1h 27m DVD
A rock 'n' roll werewolf may sound sexy, but pop star Rob Parker is far from certain his fans will embrace his lycanthropic tendencies if his secret gets out. Thus, when an ardent fan discovers the truth, Rob kidnaps her to contain the problem. Sexual tensions mount between Rob and his captive as mutilated corpses turn up in the news in this sexy horror fest starring Doug Grady, Shannon Greer, Mark Schell and Chri Christian.