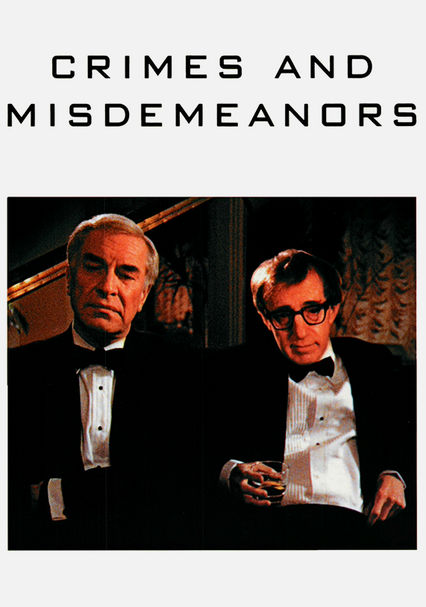 1989 PG-13 1h 44m DVD
Respected ophthalmologist Judah (Martin Landau) faces an ugly dilemma when his mistress (Anjelica Huston) threatens to expose their affair. Meanwhile, married filmmaker Cliff (Woody Allen) falls for a TV producer while shooting a documentary about an arrogant comedian (Alan Alda). Allen's masterful meditation on truth and responsibility, by turns both funny and harrowing, ranks among the finest of the iconic director's work.

Parents need to know that Crimes and Misdemeanors is a 1989 Woody Allen comedy that addresses adultery, murder for hire, betrayal, morality, and the question of whether the universe is guided by a God and differences between good and evil. At the same time, it sends up self-importance in the entertainment industry and glorifies the Golden Age of black-and-white Hollywood film. Adults smoke cigarettes and drink, and there are references to consensual sexual bondage. Expect to hear the word "bulls--t." A woman is murdered by a hired killer; the act is not seen, but her body is later shown (clothed and with some blood). There's a reference to a man defecating on a woman.

A man complains his marriage has been platonic for a year: "The last time I was inside a woman was when I visited the Statue of Liberty." A married man carries on an affair with a younger woman. A reference to sexual bondage.

A woman is murdered by a hired killer. The act is not seen, but her body is later shown (clothed and with some blood). A reference to a man defecating on a woman.

The universe is amoral, and many among us who have done terrible things walk around without guilt, rationalizing bad deeds. People need to find joy in the simple things -- family, work, and hope that future generations might understand more about the human condition. People define themselves by the choices they've made in life. Comedy is tragedy plus time.