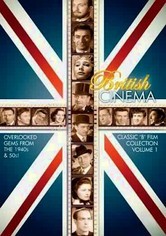 1938 NR 2h 19m DVD
Tales featuring a maniac and a detective are featured in this double bill. Based on the popular novel by Wilkie Collins, the first half stars Tod Slaughter as a nameless homicidal lunatic who kills the heir of a wealthy estate in order to assume his identity and collect his fortune. The second half revolves around intrepid investigator Sexton Blake (George Curzon) and his efforts to bring down a crime boss (Tod Slaughter).