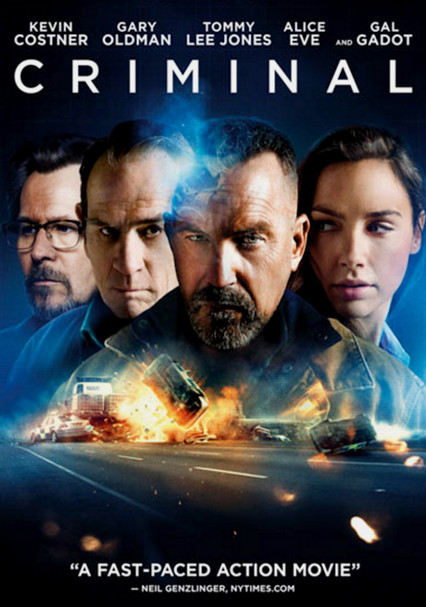 2016 R 1h 53m Blu-ray / DVD
Resorting to radical measures to combat a terrorist threat, the government implants a dead CIA operative's memories and skills in a condemned prisoner, hoping that he can carry out the original mission.

Parents need to know that Criminal is a sci-fi-ish thriller in which a CIA agent's brain is transferred into the body of a sociopath (star Kevin Costner). There's tons of graphic, cringe-inducing violence and gore, including grisly bloody murders, guns and shooting, brutal fights/beatings, kidnapping, explosions, brain surgery, bloody wounds, and more. Language is also very strong, with several uses of "f--k" and "s--t." There's one brief sexual situation, when main character touches a woman's clothed backside; flashbacks also show a married couple touching each other in an intimate way. Characters briefly smoke cigarettes. Those drawn by the presence of Ryan Reynolds should know he's not in very much of the movie.

A man strokes a woman's clothed backside with his finger. Brief flashbacks of a married couple touching each other in an intimate way.

Tons of graphic violence throughout. Some of the intent is to demonstrate that the criminal character has no emotions (regret, remorse, guilt, etc.), but it's no less cringe-inducing. Guns and shooting, blood spatters. Murder with a metal hook to the neck. Oral electric cattle-prod torture. Punching, bashing, beatings (some via objevcts like axes, lamp bases, and even a cooler). Car crashes with projectiles. Explosions. Missile strikes a plane. Gory crime-scene photos. Gory brain surgery, with bleeding. Gory leg wound, with stitching, dressing, etc. Tranquilizer darts. Yelling. A woman is duct-taped to bed. Small girl kidnapped.