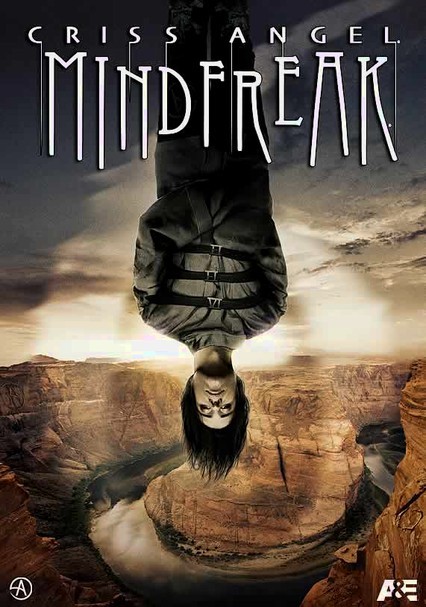 2005 TV-PG 5 seasons
Ultra-hip illusionist and escape artist Criss Angel brings magic to a new generation in this A&E reality series, which showcases the magician performing mind-bending tricks and death-defying stunts on the streets of Las Vegas and other public spaces. From catching a bullet in his teeth and walking on water, to setting himself on fire and even levitating an entire audience, Angel constantly pushes the envelope of his trademark extreme illusions.

Think of it as extreme magic: Mystifier Criss Angel takes the art of illusion to new heights with his unique blend of prestidigitation, street performance, music and death-defying stunts -- including catching a bullet in his teeth and being set ablaze. To enhance the credibility of his demonstrations, Criss performs all his feats in public places rather than on a stage. Prepare to be amazed by these tricks that stretch the limits of belief.

Illusionist Criss Angel returns for a second season of nontraditional magic that finds the three-time Magician of the Year floating between skyscrapers, conducting a celebrity-studded séance in Death Valley, Calif., and more. Filmed in Las Vegas, Los Angeles and Iraq, the show documents not only Angel's death-defying stunts but also the behind-the-scenes work that goes into them. Penn & Teller, Ice Cube, Vince Neil and others guest star.

Five-time Magician of the Year Criss Angel returns for a third season of the show that has the extreme illusionist defying death in nearly every episode. From escaping a racing truck filled with explosives to being steamrolled on a bed of glass, levitating 500 feet above Las Vegas's Luxor Hotel & Casino and more, Angel takes magic to new levels, entertaining a slew of celebrities (including Jamie Kennedy and Flavor Flav) along the way.

Master illusionist Criss Angel kicks off the fourth season of his series by walking 200 feet on the surface of Lake Mead -- the world's largest man-made lake -- as crowds of unsuspecting bystanders and boaters watch with wonder. Other spectacular season highlights include the maverick magician, with his death-defying methods, attempt to escape a nine-story Miami condominium after rigging it with ticking explosives.

The bad boy of magic, Criss Angel, takes the intensity up a notch in the fifth season of his hit series. With five new illusions that defy logic -- and gravity -- Angel challenges his audiences to believe that anything is possible. Angel puts his life on the line by burying himself alive, traversing a field of explosives and testing the theory of teleportation. Then, he turns the tables, levitating an entire crowd perilously above the ground.

Parents need to know that each episode of this series begins with a strong disclaimer for good reason, as the stunts performed could be deadly. Although Angel and his team plan for every possible mishap, the fact that he makes a spectator sport out of self-inflicted pain is disturbing. The show at least attempts to portray the seriousness of the stunts and follows up on any resulting injuries.

There's a lot of self-inflicted pain, but no violence.

Multiple uses of "damn" and "hell," but harsher words are bleeped out.

Angel is the poster boy for making questionable choices, but he's the only one who suffers physically from the stunts. His apparent ambiguity to the emotions he subjects his family to is a little disconcerting.

Spectators on the street, in restaurants, or casinos are often smoking and drinking.