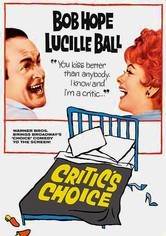 1963 NR 1h 40m DVD
With his acid pen always at the ready, theater critic Parker Ballantine (Bob Hope) is never at a loss for words. That is, until his wife, Angela (Lucille Ball), writes a play of her own. Parker's resulting stress over whether to review Angela's work leads him to seek the advice of a psychiatrist (Jim Backus) and even his ex-wife. Rip Torn and Marilyn Maxwell star in this sharp adaptation of Ira Levin's play.