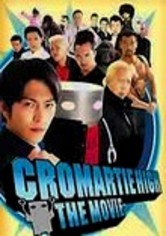 2005 NR 1h 25m DVD
This out-of-this-world comedy based on the manga by Ejii Nonaka walks the halls of Cromartie High School, where the mild-mannered Kamiyama (Takamasa Suga) is trying to institute a few reforms. Problems arise when the privileged but dim-witted Hokuto (Noboru Kaneko) tries to use his wealth to take over the school, and the school's resident gorilla -- that's right, a &NFigorilla&NFi_; -- tries to make a few changes of his own.