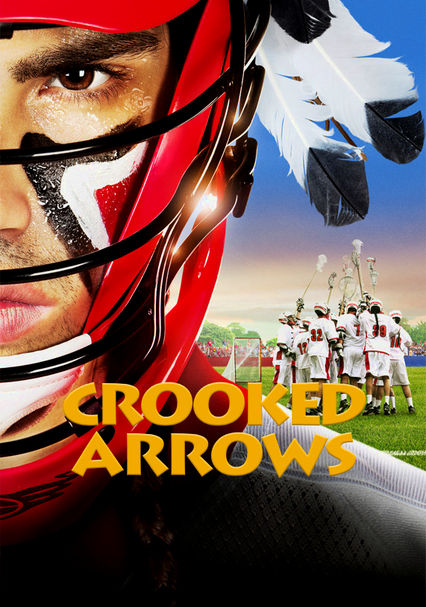 2012 PG-13 1h 45m Blu-ray / DVD
Preparing to square off against the superior teams of an elite prep-school league, the rag-tag members of a Native American lacrosse squad gain confidence on the playing field as their coach inspires them to take pride in their cultural heritage.

Parents need to know that Crooked Arrows is an inspirational sports drama about a ragtag team of Native American teen lacrosse players and their reluctant new coach. It received its PG-13 rating primarily for comedic use of the word "vagina" (seen only in subtitles), but other than that, there's not much that's iffy for younger viewers. Violence is restricted to the lacrosse field, with pushes, slams, body-checks, and falls. Some teens are injured, but very little blood is shown. There's some mild innuendo and images of sexy (but clothed) girls dancing on a bar top in a casino. Adult characters are seen with whisky in one scene. Kids and teens will learn about Native American culture, including the fact that Native Americans invented lacrosse more than 1,000 years ago.

The hero mistranslates a Native term, and it comes out "vagina." The teens have a lot of fun yelling this to each other (seen in subtitles) on the field. Also images of sexy, clothed girls dancing on bar tops in a casino, a male character is shown shirtless, and there's some mild innuendo.

Sports-related hitting, pushing, slamming, and body-checking on the lacrosse field. Some teens are injured, with dislocated shoulders and broken ankles. Very little blood is shown.

"Vagina" is used fairly often but is only seen in subtitles. Also infrequent uses of "ass," "moron," "suck," "frickin'," and "wussy."

The movie celebrates community, family, and teamwork above greed and selfishness.

Adult characters are seen with glasses of whisky in a business meeting.