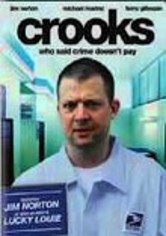 2002 NR 1h 20m DVD
One evening, while drowning his sorrow at the local bar, 65-year-old postman Sol confides to bartender Nicky (Mike Marino) his plans to rob the local post office of its cache of valuable stamps. When Sol drops dead, Nicky decides to carry out Sol's caper and put an end to his own financial misery. Jim Norton co-stars as Nicky's best friend, Paul, in this comedy about bumbling crooks and their hilarious misfortune from director Paul Battista.