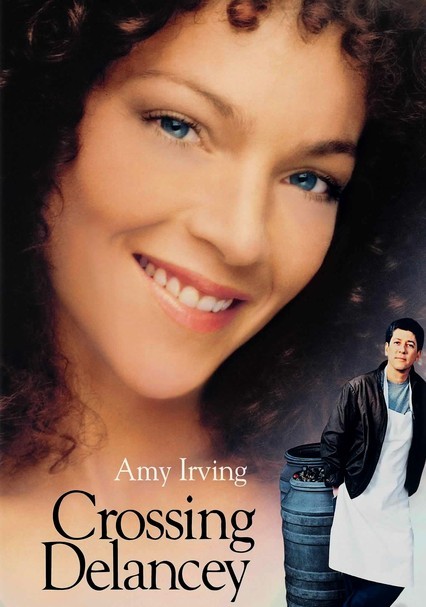 Parents need to know that Crossing Delancey is a warmhearted, engaging story of a young woman falling in love in 1980s Manhattan. It's as much about New York City as it is about Izzy Grossman. From the hallowed cubbies of one of the last independent book stores on the Upper West Side, with its poetry readings, self-absorbed writers, and eager young intellects, to the kosher kitchens, outspoken busybodies, and loving arms of an aging grandmother in a Lower East Side Jewish neighborhood, Izzy struggles to balance her own diversity. There's no overt sexuality; expect some kissing and foreplay as well as light sexual themes, references, and comic banter (infidelity and seduction included). Two young women are seen in bras and panties and later wearing towels in a sauna. A sprinkling of salty language ("hell," "a--hole," "balls," "schmuck") is heard. Characters drink adult beverages (wine, schnapps) in social settings; Izzy gets tipsy in one scene. A woman breastfeeds an infant (breast is covered) and a Jewish bris (traditional circumcision in the home) is held; the procedure is offscreen. Fine for teens and anyone else who enjoys a fairy tale romance about an independent woman determined to "have it all."

Heroine is involved in an implied casual sexual relationship with a married man; they are seen in bed after a sexual encounter. Some comic sexual banter between two women in a steam room. Two young women are shown in sexy underwear and in a steam room wearing towels. Kissing and foreplay in a man's apartment is cut short.

Wine and alcoholic beverages are served in social settings: bookstore party, dinner, poetry reading, at home. Heroine gets a little tipsy in one scene. Some characters smoke.