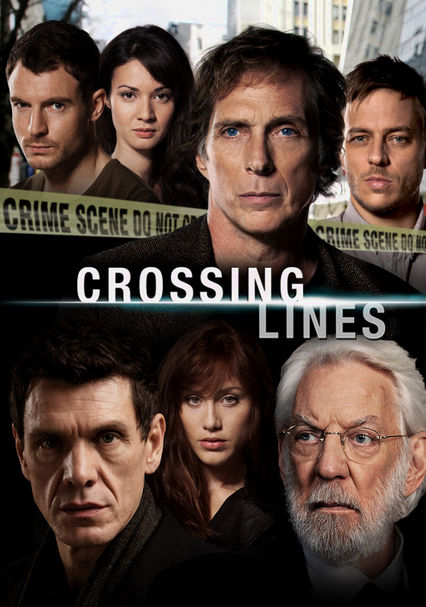 2013 NR 1 season
With a team that includes an American cop, an Italian interrogator, a German tech guru and an Irish weapons expert, the International Criminal Court's special crime unit hunts down lawbreakers whose offenses cross borders in Europe.

In this international crime drama, Carl Hickman is a bitter ex-cop whose friends persuade him to join a global police agency based in the Hague. Hickman soon finds himself traveling far and wide to hunt down some of the world's most artful criminals.

Parents need to know that Crossing Lines is a grim drama about an international crime fighting team that attempts to solve murder cases. Viewers see dead bodies and killings, though grievous injuries like stabbings take place just offscreen while the camera cuts away and scary music plays. Viewers also see bodies being examined by investigators in the morgue and gory crime scenes, and they hear graphic discussion of injuries. Murderers may have a sexual angle, with viewers invited to look at victims in their underwear before we see them being stalked and killed. Many shots take place from the killer's point of view, and young, attractive women are generally the victims we see. There are a few curses ("ass") and some ethnic insults. There is also some onscreen drinking, and a major plotline about one character's use of morphine to control pain from a hand injury.

Members of the crime-fighting team on Crossing Lines are set up to be single-n-sexy so expect dating, flirting, and more. There are some sexual references, i.e. a comment that an officer is not like "a virgin on her wedding night," and there is some queasy mingling of sex and violence, as when we see a young women strapping on sexy underwear and then being stalked by a killer in the woods.

Viewers see women stalked and streaked with blood, running away from a menacing male silhouette. We see parts of a dead body, such as a hand with a terrible wound. Guns are brandished, and we see many shots from the point of view of a serial killer. There are stabbings which occur just offscreen, with scary music and sound effects and graphic discussions of murders and maimings.

A few curses: "Kiss my ass in Macy's window." There is also some ethnic mockery, as when one character expresses astonishment that an Irish man would turn down an alcoholic drink.

Some references to drinking; one character uses morphine to control pain from an injury and is frequently seen sweating with pain and possibly from withdrawal.