Crowded House: Farewell to the World 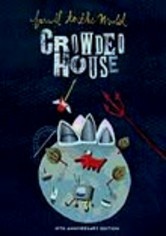 Crowded House: Farewell to the World

1996 NR 2h 5m DVD
In November 1996, lead singer Neil Finn and the rest of the boys in the Aussie pop band Crowded House took the stage for the last time when they performed before 12,000 fans at the Sydney Opera House. This film captures that magical night. In addition to stirring renditions of favorites such as "Something So Strong" and "Don't Dream It's Over," the presentation features a documentary on the farewell concert and interviews with band members.