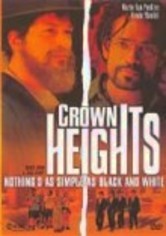 2002 R 1h 29m DVD
In the summer of 1991, racial tensions between African Americans and Hasids in a Brooklyn community reached a boiling point when a Jewish man accidentally killed a black child with his car. This dramatization centers on two unlikely alliances that explosive summer: one between a Hasidic rabbi (Howie Mandel) and an African-American community leader (Mario Van Peebles); the other between black and Jewish teens with a mutual love for hip-hop music.