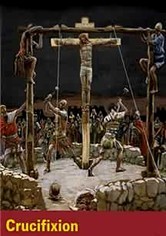 2008 NR 1h 40m DVD
Though crucifixion is best known as the horrific technique used to kill Jesus Christ, this History Channel documentary explores its fascinating origins and reveals how it became a common, but very symbolic, method of execution in biblical times. The film includes dramatic re-creations, computer imagery and footage of voluntary crucifixions in modern religious rites to show exactly what happens to the human body when hoisted onto a cross.