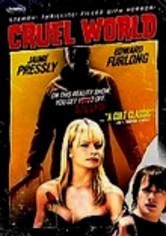 2006 NR 1h 28m Blu-ray / DVD
Upset after being ejected from a reality show, Philip (Edward Furlong) gets his revenge when he decides to produce a new reality series, "Cruel World." Contestants -- including the woman who voted Philip off the last show (Jaime Pressly) -- live in a remote mansion, where losers face a grisly fate. Directed by Kelsey T. Howard, this tongue-in-cheek splatter fest co-stars Aimee Garcia, Andrew Keegan and Daniel Franzese.