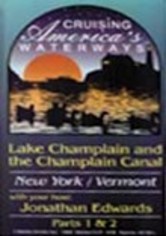 2003 G 1h 0m DVD
Join the esteemed crew of the television series "Cruising America's Waterways" as its members launch into yet another episode. This time, the destination of choice is magnificent Lake Champlain and adjacent Champlain Canal. The fun begins in Albany, N.Y., from which the vessel sets sail. Viewers will enjoy stops at the Shelburne Museum in Vermont, the Saratoga Battlefield, the shores of Burlington and more.