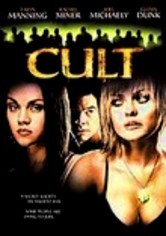 2006 NR 1h 25m DVD
A college project goes horribly wrong when students Mindy (Rachel Miner) and Cassandra (Taryn Manning) investigate a historic local cult for a class and discover that the group's power came from an ancient Chinese amulet infused with an otherworldly force. As they try to solve the mystery of the jewelry, they unleash the fury of a murderous supernatural power. This spine-chiller was an official selection at the 2006 Shriekfest Film Festival.