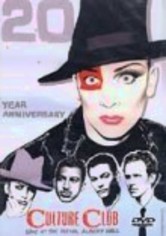 2002 NR 2h 10m DVD
In 2002, seminal 1980s pop group Culture Club reunited for a tour celebrating their 20th anniversary. This performance, filmed live at London's Royal Albert Hall, features hits such as "Do You Really Want to Hurt Me?" and "Karma Chameleon." Nineteen songs are included in all, plus in-depth interviews with Boy George and drummer Jon Moss, clips from Boy George's Broadway musical "Taboo," rarely seen photographs and more.