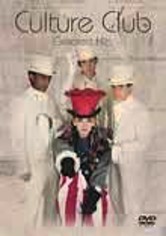 2004 NR 2h 20m DVD
British band Culture Club and front man Boy George are in top form in this sensational collection of videos featuring the pop supergroup's best-loved songs, such as "Karma Chameleon," "Do You Really Want to Hurt Me?" and many more. Along with an extensive interview filmed during the band's late-1990s reunion, this program includes a live 1983 concert, where the boys bring the house down at London's Hammersmith Odeon Theatre.