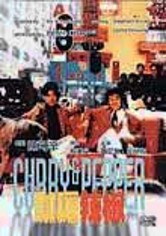 1990 NR 1h 41m DVD
Sensible cop Curry (Jacky Cheung) and his hotheaded partner, Pepper (Stephen Chow), try to catch a ruthless killer in this action-packed comedy. Despite their differences, the childhood pals wind up falling for the same woman (Ann Bridgewater), an attractive reporter who's helping to cast a new "Cops"-type reality show. But even the bright lights of Hollywood won't stop the two in their mission to bring down a desperate gunrunner (Blackie Ko).