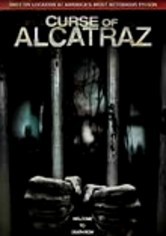 2007 R 1h 27m DVD
Accompanied by his students and a forensics expert, a professor heads to Alcatraz -- one of the world's most notorious prisons -- to study a mummified corpse. But their work unwittingly awakens a deadly curse that infects them one by one. Director Daniel Zirilli also co-wrote the screenplay to this independent horror thriller, part of which was filmed on location at "the Rock" itself on Alcatraz Island.