Curse of the Cannibal Confederates 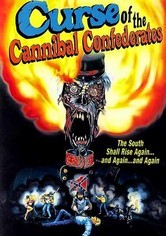 Curse of the Cannibal Confederates

1982 NR 1h 31m DVD
During the Civil War, a brave group of Confederate soldiers was captured and tortured to death by the Union Army. Flash-forward to the present day, and an idyllic picnic at the site of the long-ago battle becomes another kind of picnic for the living dead! Finger-lickin' good schlock from the gang at Troma -- the same production group that brought you The Toxic Avenger.