Curse of the Wolf 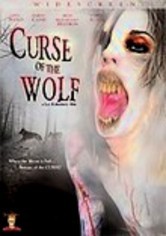 Curse of the Wolf

2008 NR 1h 35m DVD
When female werewolf Dakota (Renee Porada) discovers a way to halt her transformations, she attempts to flee her pack and escape into the anonymity of the city, where she hopes to live a "normal" life. Her carnivorous chums, however, have other plans for the sexy she-wolf, and if Dakota is to thwart them, she'll need all the human help she can muster, including that of some would-be assassins and a shady nightclub owner.