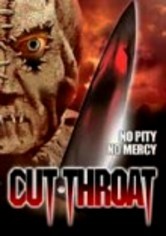 2001 NR 1h 30m DVD
Two struggling filmmakers think they've hit the jackpot when a big shot with a major motion picture house agrees to let them to use a studio lot to shoot a low-budget horror flick. But when the shoestring production runs out of money, a psychotic whacko begins killing off the cast and crew one by one. Luciano Sober, Kate Norby and Paytin James star in this tale of maniacal murder from director Keith Walley.