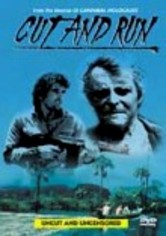 1985 NR 1h 30m DVD
While tracking down leads for a high-profile scoop about a string of unexplained murders, an American television reporter (Lisa Blount) and her cameraman (Leonard Mann) uncover a link to the whereabouts of their editor's missing son (Willie Aames). The story eventually takes them to the jungles of South America, where the duo runs afoul of dangerous drug lords and risks their lives for the sake of front-page news.