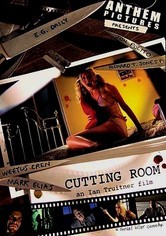 2005 NR 1h 23m DVD
In this comic horror flick, neophyte filmmaker Ed Smith (Mark Elias) achieves more realism than he'd ever imagined when someone begins knocking off the cast and crew of his schlocky serial-killer movie. As people on the set of "Curse of the Killer" meet their deaths one by one, it's up to Smith and his grumpy casting director to keep the production from falling apart. Elizabeth Daily, Weetus Cren, Richard T. Jones and Jon Polito also star.