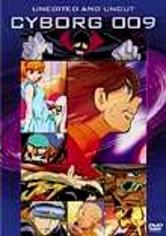 2003 NR 2 discs
The Black Ghost Organization has overtaken nine people from around the world, turning these functional human beings into superfunctioning human weapons called the Zero-Zero Cyborgs. Although all of the cyborgs have special powers, the hero of the group, 009 (voiced by Joshua Seth and Derek Stephen Prince), is the most advanced of the nine cyborgs, and is faced with getting the individuals to fight collectively against the Black Ghost.