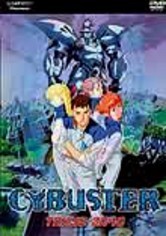 2004 NR 5 discs
Imagine a Tokyo decades into the future, where pollution, the ugly by-product of a cluster of earthquakes, has obliterated the landscape and humans have to contend with the after-effects of an environmental collapse. Young Ken Ando's sister is ill, which propels him to try out for the team that's working to clean up the city. But he's not accepted into the troupe, a setback he pushes aside as he sets out to prove he's committed to the cause.