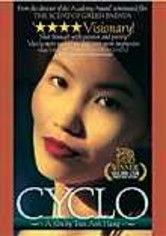 1995 UR 2h 3m DVD
Le Van Loc and Tran Nu Yen Khe star in this drama, the Best Picture winner at the 1995 Venice Film Festival, about a pedicab driver whose "cyclo" is stolen. Unable to make a living, he goes to great lengths to put food on his family's table. He reluctantly turns to the mob for work, and soon discovers a devastating secret: His sister, desperate to escape poverty, is deeply involved in the seamy underbelly of gang life.