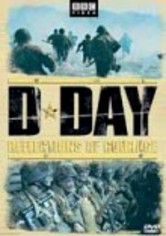 2004 NR 1h 30m DVD
It's the day that defined a generation -- "The Greatest Generation." And these are stories you've never heard before. Witness the complex and deadly secret war fought by the men and women of France, the defense of the western front by the forces of Nazi Germany, and the preparation and execution of the Allied invasion of Normandy. Discover the plans, the people, the courage and the sacrifice that led to that unforgettable day.