D-Day: The Battle That Liberated the World 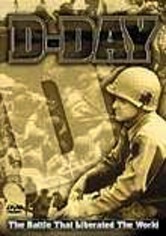 D-Day: The Battle That Liberated the World

1997 NR 0h 52m DVD
June 6, 1944, was a historic day that proved to be a major turning point of World War II. In a dangerous move that surprised Axis forces, the largest covert operation in history was performed, as an unparalleled Allied force stormed the beaches of Normandy. This documentary transplants the viewer right into the front lines through actual footage from the battle, retracing the steps taken on that fateful day.