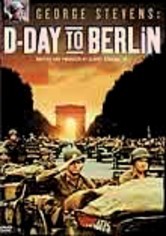 1994 NR 0h 46m DVD
Narrated by George Stevens Jr., this documentary by Oscar-winning director George Stevens trains its lens on World War II in a way that's rarely been seen before: in full color. The effect is nothing less than astounding, as viewers bear witness to the carnage of all-out battle in the European theater, which was home to some of the bloodiest skirmishes ever, from the Norman invasion to the fall of Berlin.