D-Days in the Pacific: The Path to Victory 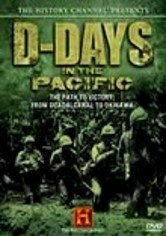 D-Days in the Pacific: The Path to Victory

1944 NR 2 discs
Based on eyewitness accounts, this three-part History Channel program gives an overview of the amphibious operations -- known as "D-Days" in military code -- waged in the Pacific during World War II. Along with examining dozens of the more than 100 D-Days carried out by American forces, the program also focuses on U.S. tactics and the weakening of Japan's defenses. Extras include A&E "Biography" programs and a documentary on the Peleliu battle.