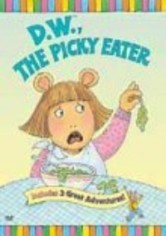 1998 NR 0h 45m DVD
Based on Marc Brown's popular children's books, PBS's educational television series follows the animated adventures of lovable Arthur the aardvark as he noodles through problems and learns life lessons. In the titular episode, Arthur's little sister has a meltdown in a restaurant. In "Buster and the Daredevils," Buster tries to fit in with two cool kids. And in "Arthur and the Crunch Cereal Contest," Arthur writes a commercial jingle.