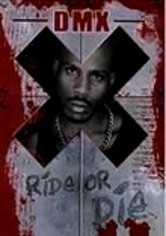 2004 NR 1h 20m DVD
With his chiseled, tattooed body and his trademark obsession with dogs, hip-hop powerhouse DMX thrills his fans as one of the most distinctive and intense voices in rap. This biographical documentary charts the rise of the rapper -- born Earl Simmons in Baltimore in 1970 -- from his troubled and abusive childhood through his emergence as a superstar, the first-ever artist to have his first four albums debut at No. 1.