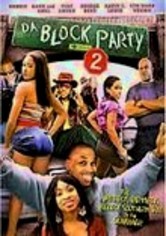 2006 NR 1h 30m DVD
CJ is determined to carry on his family tradition by throwing the biggest, coolest, rowdiest block party of the summer in this raunchy comedy sequel. He has everything under control -- until his older brother's manipulative woman, Kanisha, and a crooked cop dubbed Blue Eyes start causing major problems. The cast includes Webbie, Kane and Abel, Tiny Lister, George Boyd, Gavin Lewis and 5th Ward Weebie.