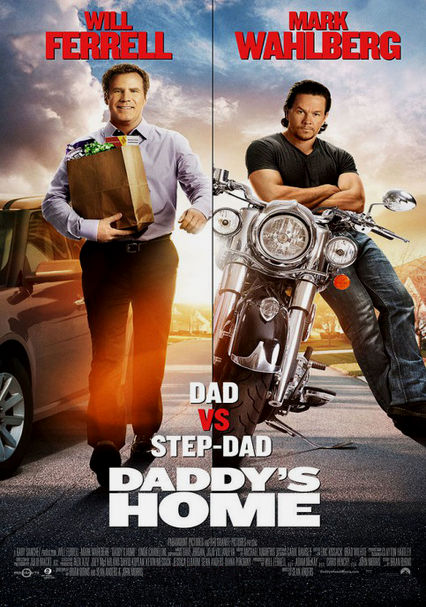 2015 PG-13 1h 35m Blu-ray / DVD
After marrying an alluring divorcée with two children, Brad steps eagerly into his role as stepdad. However, chronic interference from the kids' suave natural father leads to a slapstick rivalry between the two determined men.

Parents need to know that Daddy's Home could easily have been a family-friendly film if there had been fewer crass jokes and obscenities -- but as it is, while it features elementary-aged children, it's definitely not for them. There's quite a lot of swearing (including "s--t" and more), plus recurring jokes about sex, penis size, and virility. The movie trades in outdated stereotypes: that kind, nice guys aren't manly and that exciting guys must be macho, motorcycle-riding bad boys. There's some adult drinking and drunkenness, accidental violence and physical comedy, and generally cringe-inducing gags. Although there are ultimately positive messages about blended families and the toxic nature of jealousy, they don't outweigh this Will Ferrell/Mark Wahlberg vehicle's unnecessarily crass humor.

Drunken jokes about making love to "our wife"; recurring jokes about Dusty's penis, scrotum size, and virility (with a doctor actually making two men undress so a woman can see which is healthy and which is not). Allusions to the size of a man's "sword."

Slapstick and physical comedy. Brad has a motorcycle accident that leaves him literally stuck in a wall of his house. In another scene, a character is injured during an elaborate skateboarding trick. A man is infertile because an X-ray machine was knocked out of place at the dentist's office and irradiated his groin instead of his mouth. Men push and shove each other at a dance. A boy hits a girl who was bullying him. A man throws a basketball that hits and injures a cheerleader and another that hits and injures a wheelchair-bound boy.

Amid the over-the-top humor are positive messages about blended families, the benefits of biological and stepparents getting along, and the fact that jealousy, while understandable, is toxic to healthy relationships. Brad promotes the idea of nonviolent confrontation and active parental and stepparental involvement in children's lives. On the downside, the movie plays to the stereotypical notion that kind, nice guys aren't manly and that exciting guys must be macho, motorcycle-riding bad boys.

Adults drink -- in one case to the point of public intoxication that leads to inappropriate comments/behavior and getting thrown out of a sports venue.