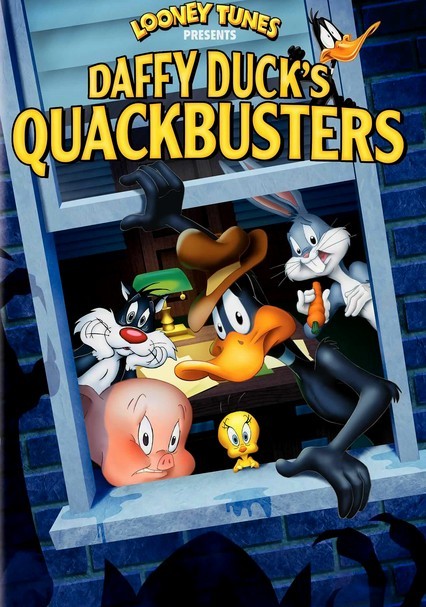 1988 G 1h 12m DVD
This animated feature -- crafted from classic Daffy Duck shorts edited into a brand-new tale -- finds the self-centered duck using a windfall inheritance to open a fraudulent Ghostbusters-like spook-removal service. But when the spirit of his late benefactor learns of Daffy's scam and poor treatment of his employees (Bugs Bunny, Porky Pig and other Looney Tunes characters), he torments the greedy fowl by making his newfound wealth disappear.

Parents need to know that most of this movie consists of animated short films that are more than fifty years old. As such, there are characters who smoke, puffing furiously; there's one scene in which a drunken man staggers out of a bar; and while the action is definitely fake, animated, and designed for humor, it consists of crashes, axe-wielding bad guys, explosions, treacherous falls, and electric buzzers sending shockwaves through opponents. Hair stands on end; heads sizzle; and dynamite is a weapon of choice. There are monsters from beginning to end, but they're drawn for humor and are not threatening.

One flirtatious kiss between a girl and duck.

Daffy Duck's holding onto his inheritance is based upon his ability to be honest and treat his employees with respect. Each time he offends, more money disappears.

Cartoon characters smoke cigarettes and a cigar. Reference is made to beer drinking, and one man is shown staggering and drunk as he exits a bar. A "nightclub" scene shows characters with drinks on their tables.