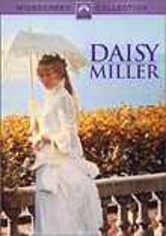 1974 G 1h 31m DVD
Director Peter Bogdanovich's version of the Henry James novel set in the 1800s stars Cybill Shepherd as Daisy, a rich American who takes the grand tour of Europe to mingle with others of her class in hopes that their breeding will rub off on her. But Daisy's mixture of American exuberance and fondness for candid expression is at odds with European high society, and instead she finds herself rubbing people the wrong way.