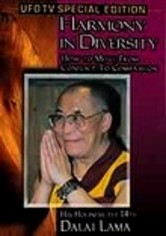 1997 NR 0h 50m DVD
This video includes the Dalai Lama's 1997 speech to dignitaries at the Cathedral of St. John the Divine in New York City about a future dependent on humanity's ability to build relationships and communities in fellowship. He urged attendees to respect the world's spiritual and cultural traditions. Only by teaching our children and each other, he says, will we move from a century of violence to a new century of dialogue.