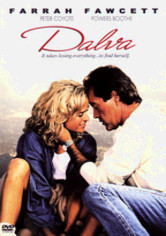 1996 NR 1h 32m DVD
Young Dalva, a teenager who's part Sioux Indian, falls in love with a newcomer to her reservation and becomes pregnant -- only to learn that the father of the child, Duane, is also her half-brother, which forces her to give the baby up for adoption. Many years later, Dalva (Farrah Fawcett), by way of a rendezvous with Duane, falls in love with a friend of her father's (Powers Boothe), who gives her the courage to find her long-lost son.