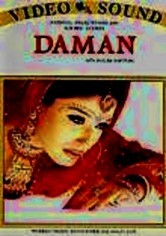 2001 NR 2h 1m DVD
Durga (Raveena Tandon) endures constant abuse by her husband, Sanjay (Sayaji Shinde). One night, Sanjay brutally rapes Durga, resulting in the birth of their daughter, Deepa (Raima Sen). Determined that Deepa not suffer the same fate she's endured, Durga flees with the child. But when Sanjay tracks them down, Durga will have to make a final stand in this award-winning drama from Kalpana Lazmi with music by Bhupen Hazarika.