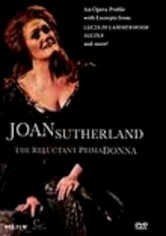 2007 NR 0h 59m DVD
One of the greatest opera singers of the late 20th century, Dame Joan Sutherland began her career in obscurity, going unnoticed at Covent Garden for seven years. Then came two roles of a lifetime -- Lucia di Lammermoor and Alcina -- and within a year, she was launched to superstardom. The great Luciano Pavarotti and Franco Zeffirelli are among those who pay tribute to Sutherland in this insightful documentary.