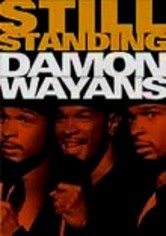 1997 NR 0h 57m DVD
Emmy-nominated comedian Damon Wayans, who's perhaps best known for his work on the groundbreaking comedy sketch show "In Living Color," has a knack for creating funny characters. But he plays his most hilarious character yet in this gut-busting HBO special filmed live in front of an appreciative audience: himself. Riffing on marriage, kids, work and a variety of other topics, Wayans proves he's still relevant in the cutthroat world of stand-up.