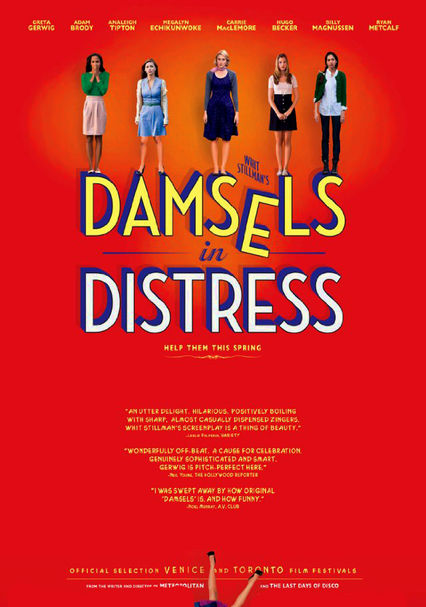 2011 PG-13 1h 39m Blu-ray / DVD
In Whit Stillman's offbeat comedy, three pretty friends plan to use music, dance and perfume to brighten the lives of their fellow college students. But before long, the girls find themselves busy dealing with problems of their own.

Parents need to know that Damsels in Distress is a quirky indie that isn't the crude raunchfest audiences might expect from a college-set comedy. It's actually very tame, with the exception of some making out and a few references to a sexual relationship based on the boyfriend's unorthodox religious beliefs. The issue of suicide prevention is dealt with in a wry manner (the main characters get depressed students interested in tap dancing and musicals). Language includes several uses of "bitch," as well as "damn," "retard," and "ass"; drinking is limited to a scene at a fraternity party. It's notable that the main characters are female, since so many college movies feature guys in the spotlight. But with so much dialogue, it's likely younger teens may not be ready for Damsels in Distress' sophisticated humor.

Sexuality is mentioned or referred to on many occasions, but there aren't any graphic love scenes. After a make-out session between one of the girls and her beau, he explains that his religion requires him to make "non-procreative love" (an obvious allusion to anal sex, although the words aren't used). She nods in agreement, they begin to kiss, and the scene fades away. This belief is mentioned a few more times. Other characters kiss (in a couple of cases, the guy is with another one of the girls at the time), and one girl refers to a guy as a "player."

No actual violence, but since the central clique of girls runs a suicide prevention center, several supporting characters are suicidal.

"Bitch" is said the most often. Other curse words and insults include "bastard," "damn," and "ass." The word "retard" is also used two or three times.

It's hard to say exactly what the messages are, since there's a good bit of lying and personality changing in the story. But one lesson is to stay true to your own voice and ideas even when surrounded by those who don't care or don't understand you. The girls have a mission and they're not afraid it will fail, because they're sure about themselves.

One of the girls wears a Longchamp purse, but otherwise, there aren't any overt product placements.

Drinking at college parties; some attendees are presumably underage.