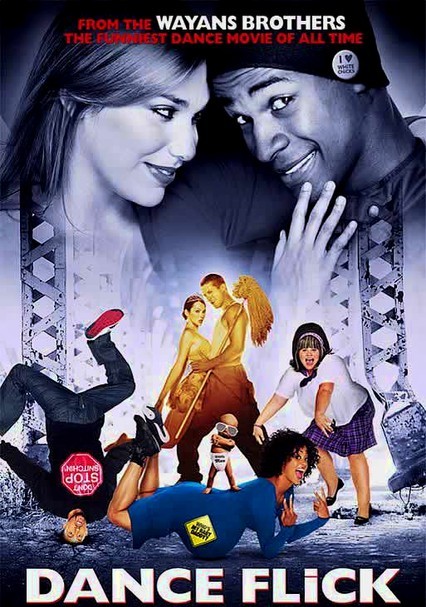 2009 PG-13 1h 23m Blu-ray / DVD
Although she gave up dancing after a tragic accident, suburban white girl Megan (Shoshana Bush) takes it up again after moving to the inner city. Coached by tough guy Thomas (Damon Wayans Jr.), Megan learns some new moves -- and how to believe in herself again. Damien Wayans directs this outrageous send-up of the inspirational dance movie, a film he also co-wrote with his uncles Shawn, Keenan Ivory, Marlon and Craig Wayans.

Parents need to know that this lowbrow comedy is much raunchier than the teen-friendly dance movies it's spoofing. There's lots of gross-out humor, including a character's head literally going up his butt, a fat man squashing a thinner man in a dance battle, and more. Sexuality includes references to teen pregnancy, penis size, baby daddies/mommas, and pole dancing; a couple also kisses and has off-camera sex. The violence is obviously fake and cartoonish; language ranges from "damn" to "s--t" but isn't extreme.

Lots of jokes about penis size, interracial dating, condoms, sexually transmitted diseases, teen pregnancy, "baby daddies," and "vaginocology." A teacher named "Ms. Cameltoe" sports an obvious camel toe. In terms of actual sex scenes, there aren't any, but one couple kisses on a few occasions and admits to having (off-camera) sex.

Fake violence is played for laughs, like when the protagonist's mother is killed in a prolonged, jokey car-accident sequence or when someone is squashed by an obese man during a dance-off. A popular nightspot is called "Club Violence," and patrons frequently wave their guns. A character is killed doing a ridiculous acrobatic dance move.

Nothing is off limits for the movie's spoofy humor, and there are tons of stereotypes -- about everything from the kind of suits that black men wear ("Kool-Aid red" and "Djimon Hounsou black"), to how gay teens (and P.E. teachers) act, to the concept of baby daddies and baby mommas. Lots of potty/gross-out humor.

Non-stop references to other movies.

Characters drink (at nightclubs), and in one scene a father orders a drink for his baby and then gives it to him with a straw (off camera).