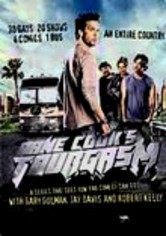 2006 TV-MA 3 discs
This comedians-on-tour reality series features popular funnyman Dane Cook and three of his fellow comics -- Jay Davis, Gary Gulman and Robert Kelly -- motoring across America to 20 sold-out gigs on college campuses. Following the foursome from California to Boston, the show proves that what goes on offstage is often as funny as the performances onstage. Included are clips from the quipsters' hilarious, sharp-edged stand-up routines.

Parents need to know that this HBO reality show includes jokes and discussions that touch on aspects of racism, sexism, and violence. Swearing is constant and gratuitous, and comedian Bobby Kelly uses very explicit language on a few occasions. Brief nudity is seen on various occasions. Also, while they're on the tour bus, group members continually share bathroom humor. Dane Cook has a strong teen following, but parents should exercise caution when deciding whether this show is appropriate for their kids.

Some references to sexual activity, but they're not extremely graphic. Some brief partial nudity. The show's title is an innuendo in and of itself.

Occasional scenes of cast members arguing and pushing each other, but their actions aren't physically harmful. Some references to violence.

Lots of behavior and gags that often go too far, as well as jokes based on racism, sexism, etc. But the show also focuses on how important it is to continue to work hard and take risks to be successful.

Product labels on junk food -- such as potato chips -- are purposely blurred, although the packaging is sometimes recognizable.