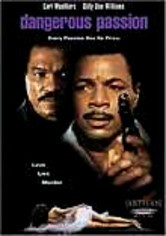 1990 NR 1h 34m DVD
When an up-and-coming underworld figure (Carl Weathers) maneuvers out of harm's way after his employer frames him for an assassination, the lucky guy's given a promotion for his trouble. In his new position, he finds himself dangerously involved with his ruthless boss's (Billy Dee Williams) beautiful wife (Lonette McKee), which leads to trouble, double-crosses ... and murder.