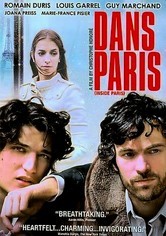 2006 NR 1h 32m DVD
Devastated by the recent breakup with his girlfriend, Paul (Romain Duris) moves back home with his divorced father (Guy Marchand), intent on wallowing in self-pity and doubt. Fortunately for him, his younger brother Jonathan (Louis Garrel) has vastly different plans for his big brother. This charming tale of love, heartache, loneliness and the solace of family is written and directed by Christophe Honoré.