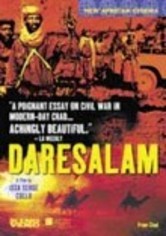 2001 NR 1h 45m DVD
After a savage act of retribution, Djimi (Haikal Zakaria) and Koni (Abdoulaye Ahmat), two boyhood friends from a small African village, become hunted revolutionaries. As they struggle in their fight against government troops, Djimi longs to return to the farming life he had to flee, whereas Koni embraces the violent existence of life as a guerilla on the run. The stage is set for a clash between the two friends. Issa Serge Coelo directs.